the much awaited result

As usual I went to the hospital yesterday. First, for my post transplant follow up and secondly for wound dressing.
The much awaited blood result sent to Singapore was ready and it showed that I do still have very, very minimal residual 'tracing' of this cancer marker. However, it is very much below the acceptable value and should not raised any unnecessary worrisome. I still feel so much thankful to God. However, yes, I would be more than happy if the result showed that I do not even have any 'tracing'. Having said that, the next possible plan is to get my brother to again donor his white cell (lymphocytes) for me. These lymphocytes can act as another troop of army to take out those remaining potential cancerous cells. The harvesting procedure is very much similar for him and the infusion process on me is very much minor if compared to the normal transplant process. Albeit, the consequence of GVHD is not something to be considered less seriously. The procedure will be planned after I completed the Cyclosporin, i.e. after 6 weeks times from now.
By the way, the wound on my chest has shown a lot of improvement but still a long way to completely closed. I just hope that it will be sooner so I could resume working in April.
Posted by ajak at 2:40 PM 4 comments:

after the third surgery

The third surgery went smooth but I was shocked when I first saw the second wound. It was much bigger than the first wound and obviously much uglier, sitting at the base of my neck. For a moment, I just sat and couldn't believed that the problem could ended this bad. I have nothing to regret, only a feeling of a 'lost'. A lost of something that you used to have. People says, if you want to gain some, you have to lose some. I became more aware of having and appreciating good health lately. Having repeatedly admitted and repeatedly felt how it was being a patient, talking to other patients (not as a doctor) has kept me reminded to be as wise and empathy.
Today, after spending 5 days in the ward, I was discharged home. I still have to go to the hospital everyday for wound dressing. I must tell how good it was to be home again, at least it is still the best place to feel good spiritually.
I guessed the wound will get better, in the end. Just be more patience, even though it has make my daily movement limited and restricted. 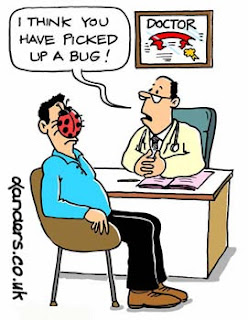 I just got called from the hospital. The surgeon has reviewed the scan and they feel the sinus is quite simple and just lied under the skin. Not extending in to the deeper structures on my right chest. I developed another small abscess along the tract of Hickman's tunnel, just above the collar bone. I guess the infection is still active and trying to find its way out through another door. That was the other reason I keep reminding the surgeon on what is their next plan when they seem to 'lost'. 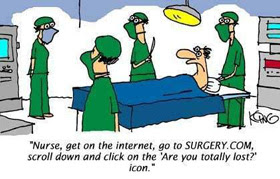 I will get admitted today and hope this would be the last surgery for this quite distressing problem.
Posted by ajak at 1:02 PM 1 comment:

For the whole last week, I was admitted. It was not a preplanned decision as I was supoosed to be discharged soon after the daycare surgery. The surgeon felt that I should have the daily 'aggressive' dressing in the ward. The sinus ( i.e the persistent Hickman's tract ) still and even larger than before the first surgery. Now I have an even larger and longer (about a little finger length tunnel) under the skin of my right chest. It has been more than a week now and the team feels that I ought to have a special dyed scan to see the extent of the 'not so SMART' tunnel. Oh.. I just got informed that it is going to be next Friday. The further plan depend on the scan findings. I just could not imagine what surgery I am going to face next...

Anyway, despite all those painful news, I am still in joy when the F.I.S.H (Flourescent In Situ Hybridization) test showed a negative signal. In a more simple meaning, I do not have anymore potential blood cells that carry the cancer signal, at least from the standard test. I am still waiting for another more sensitive test result which was sent down to Singapore about 2 weeks ago.

Not long after I was so much excited, the wound over my chest that I thought would have completely closed by now, does not happened. It has gone down to the smallest size but failed to dry. On that moment, I knew that the problem is not going to settle at anytime. So I went to see the surgeon again and as I had expected, I need to go for another surgery and hope this will be the last one.
Tomorrow I will be admitted as a day care patient and going home as soon after the surgery.
Posted by ajak at 10:57 PM 4 comments: